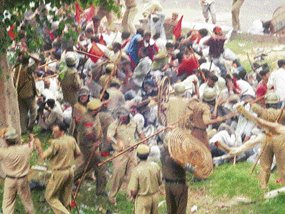 For those of you who thought that the events in Rang de Basanti are impossible, think again. There was a peaceful procession of medical students in New Delhi and the Delhi police used lathi charge and teargas and violence to ward them off. The protestors were for a cause and their methods were peaceful. Like RDB, the villian is a cabinet minister. And the police were indiscriminate. Time is soon running out and at some point we have to fight the locusts who have managed to control India for the last 60 years. But, we should do much more intelligent work than the innocent youth of RDB. We are not having a single enemy. The thing that stands before us is a heinous system of reservation that has brainwashed people enough that most people just fight on its implementation and forget its unjust concept. The system of quota is against the spirit of Indian Constitituion's Article 15 (equality and non-discrimination based on birth) and is also against the spirits of democracy worldwide (US and European courts have illegalized quota systems) 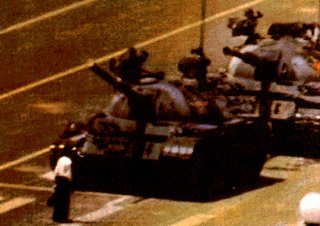 One of the most incredible personalities in the recent history is this tank man of China. During the Tianenmen square protests, where Chinese students wanted democracy and gathered at the historic tianenmen square, in Beijing, they witnessed such a blood and horror that charecterized our era. The Chinese government used tanks and heavy armoury to break the protest of innocent, weaponless students. But, one man chose to defy them. He stood valiantly against all the tanks and its stunning to look at that picture and the video, where a human 'warrior' stands brave against dozen armoured tanks. See this video.

If someone needs courage, then you need to see this. I'm always impressed with such people who can terrorize 'fear'. They are real humans, who stand courageous for a just cause. Unfortunately, we have become a society of dumb people, who are willing to compromize values, who are willing to be voiceless before injustice, who are villing to be cowards before fear and who become the main source of the evilness of the society.

"Evil can proceed only when the good become silent"