Recently I found out how to go in a time machine and going ahed 3 years, I got the following blogpost from http://www.theagni.com/ and I though I will publish it after coming back from the machine.

How to ruin a nation in few simple steps

There used to be a time (maybe >5 years ago) when I used to long for India getting mentioned in international media. And the day came, and India became a rock star of world economy. Everybody who was telling India-Pakistan, were just uttering India-China in the same breath. People were as excited as hell, and optimism run sky high. Even this author was so excited. So, far so good. But, when it gets to the head of rulers, optimism becomes arrogance and arrogance leads to misgoverning and misgoverning leads to downfall. As India started to progress, its rulers started to plot its own downfall. They prematurely curtailed the reforms process that gave a ray of hope to a dying Third world nation. They waivered trillions of rupees of loans made to unworthy borrowers (including some farmers) and destroyed the backbone of banking system at a time when the world financial system was hemorrhaging. It is no coincidence that the only two times that India went bankrupt in his history was following two loan waivers of the last 20 years. The first one in 1990-91's National Front's budget led India to bankruptsy in 1991 and second one in 2008-09's Congress' budget Indian went insolvent in 2010. Interestingly, Mr. Manmohan singh rebuilt from the ruins in the former disaster, while he led to the ruins in the latter disaster.

It also didnt help that they postponed a crucial opening up of banking sector to globalization and they maintained a highly fragmented Indian banking system saddled with big unions and highly inefficient process. Slowly the banking system started to collapse and by 2010 the banks didnt have any cash to lend, pushing everybody (including farmers) into the mouths of money sharks. Mr. Rahul Gandhi, who knew not a word to speak in the Parliament, suddenly woke up in his sleep on March 13 to deliver a 11 minute speech to a bunch of supplicants that increased the loan waiver by many times.

The opening up of retail (a sector that was once worth $300billion) was stopped in its rails by the "Big Mother" a symbol of a ultraPower (written in NewSpeak) who in the period from 2004-2010 cast a complete shadow on India and broke the nation to pieces before moving back to the Latin lands. A sector that once held hope to pull millions of poverty from an Indian quagmire called agriculture by streamlining and simplifying the process of good transfer was killed in cold blood, at the instance of few middle men (called kiranaKiller in Orwellian NewSpeak).

And as the government kept dancing in approving foreign investment and made business process even really harder by keeping the failing bureaucracy, the foreign corporations said "enough is enough" and put an end to their patience and packed home. Stock Markets that was once hovering around 20K (yes, it really was) before it went on a historic slide to the current levels of 200. 25 of the Sensex 30 companies have filed bankruptcy. No more foreign investors to fill in the gas balloon. :-(. India's oil subsidies due shot to $500billion before ONGC, Oil India and BP filed their bankruptcy. Now, people fill their automobiles, by scavenging stuff, inspired from the 2007 movie "Iam Legend". Same is the case of fertilizer and every other stuff that Indian people thought were free stuff to be misused. Water, Kerosene and every possible stuff was horribly subsided to the "poor" at the insistence of "Commies", some of whom returned back to their lunatic asylums (to the detriment of its rest of inmates) and some also made pilgrimage to Moscow, Cuba and Venezuela and singing songs daily. The once hopeful US-India nuclear deal was flushed in the toilet and the US President refused to reopen the deal summarily. So, there is no more electricity in India, now. 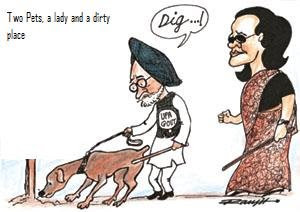 Manufacturing that was already dying to a woeful neglect of infrastructure and even present bullies in government bureaucrats died completely in 2009. The remaining performing members of the nation As the failing nation couldn't survive the outflow of money and without anything to import (save a few call center calls, and some software) the nation went once again begging to international agencies. But, this time Mr. Narashima Rao was no more there, and Mr.Singh has been taken along with the Pet dog, a parrot and a couple of cats grown by "Big Mother", back to the Latin lands (how can the Big Mother stay when India has problems). Her son went back to his date in UK and her daughter is happily enjoying hot sands of Mauritius. Mr. Chidambaram (who took "Deception 101", "Misleading 203" and "Misgoverning 404" courses in Harvard Business school with George W. Bush in 1975) has presented India's last budget in 2008 (later budgets were cancelled as there were no revenues to budget) and joined with Mr. Singh and rest of the pets and puppets of Big Mother. Its happy, happy time for all of them, running and picking up balls, and playing with water fountains. In the meantime, millions of Indian farmers are committing suicide (the number was in hundreds in 2oo8 when there were healthy banks) and there is widespread hunger and famine. there is no more employment, no more value for rupee and nothing anymore. Hey, but who cares. You didn't think about that when you voted, and didn't voice when government was misgoverning, so why now.

One of the biggest financial events in India is its annual budget. What is supposed to be a dull event of displaying numbers and fact, has been colored by successive Indian governments who use it as a pulpit to throw out doles to the hungry public. So, it is an event that is well televised and watched by Indian public with as much intensity as they would watch if India were playing finals of a Cricket WorldCup.
Mr. Chidambaram, Indian financial minister, who has delivered some progressive budgets in the past has come with a horrible political budget this year that will increase the debt burden and slowdown the economy in the future. The idea is clear - the government doesnt want to repeat its previous government's mistake of not taking the fruits of development to the poor and thereby loosing the election. So, what Mr. Chidambaram tries to do is play a bunch of tricks and hoodwink the people into thinking that the development reaches poor. So, instead of using reforms, investment and development to reduce poverty, the finance looks to remove poverty by throwing out rupee notes from the air. It looks as though Indian government is counting that this past 2 years magic will continue forever and fail to realize that what works at the peak of a cycle doesn't work at the end of the cycle. Instead of leading into progress, this budget can lead it into darkness. Indian government seems to hace reneged its promise of cutting down fiscal deficit (gap between governmental borrowings and earnings) and will add further debt to an already indebted nation (public debt at 60% of GDP, compared to 18% in China) The government seems to gone back to its socialist era that has brought so much pain and agony and made India a third world nation that had horribly lagged behind its Asian peers.

One of the biggest features of the budget is a Rs.600 billion write off of debts to small farmers. Ostensibly this is to reduce the number of suicides that has increased to very high levels in the last decade. Why the writeoff is bad:
-- It mainly targets farmers with very small land holdings (around 1 hectare). However, suicides mainly happen among cotton farmers who have fairly bigger holdings (around 10 hectare).
-- There are hardly any cases of a farmer committing suicide due to the inability to pay a government bank. Most of the suicides come from taking loans from loan sharks, and they are not going to write off the loans. Given the shallow penetration of Indian banking system, writing off bank loans and freeing up process for them to take more loans might not change ground conditions of the farmers much.
-- Any kind of a write off is morally wrong. Those hard working honest people who repaid the loans will be punished at the cost of the dishonest faulters. In the future, even the honest people will be forced to postpone or not repay the bank loans, and deliquencies will raise. Already, most rural people see bank loan more as a charity than something to be repaid.
-- Principally this makes India more socialistic and that itself is wrong. Given how much India suffered due to socialism under Indira Gandhi and Nehru, government should have known better.
-- 600 billion rupees is a huge amount that could be better used by government for bettering Indian agriculture. It could improve irrigation, research newer seeds and usher in a second green revolution and permanently change the agonies of farmers.
-- This would weaken the banking system as they will take most of the burden of loan writeoffs. In an international climate of banks in bloodbath, this is the least opportune time for such a plan. Indian banks will suffer and their chance of going big and global will be nipped in bud. No modern nation has grown by screwing its banks and financial system. Banks are the fundamental nucleus of an economy and if u treat it badly, u r in for big trouble.
-- Lastly, by rewarding small farmers this would prolong the agony of Indian agriculture. It is time that Indian agriculture start consolidating and land sizes grow. India uses 600 million people in agriculture and this is a horribly big amount. No sane economist can work out a condition where India would reatain so many agricultural laborers and still become developed. Thre is absolutely no future for so many people. The government's focus should be to move the small farmers away from agriculture by creating more jobs in industry and service sector. Also, India should dramatically increase land productivity and move more lands away from Rice and Wheat and bring in more rewarding crops. That is how rural India can see more money from Indian growth. But, by rewarding the small farmers and prolonging their stay in agriculture the government is horribly skewing India's long term development.

The only way India can revitalize its rural economy is by bringing the long awaited industrial revolution. We have had an agricultural green revolution and a service revolution is already well in its way. But, only industrial revolution can absorb so many uneducated laborers and make India's economic bone. It could wipe out the trade deficit and dramatically reduce unemployment. Thus, the fundamental focus on Indian government should be bring a rapid Industrial revolution at the scale of China's and we need every possible resource to do that. Lots of money, open policies and a strong banking is needed for this revolution. Indian rural people need a chance and deserve a bright future. But, this budget will be a very very big backward step and the Indian media is deluded in praising this step.