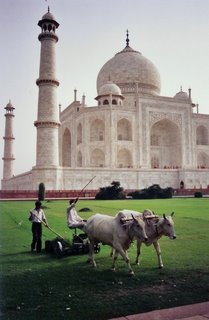 For the last two weeks, I've been vigourously trying to read and re-read all India related articles on the news. I've read almost 600 articles on India's rising prowess and Bush's visit to India. In fact, it was too much of India that I forgot what all I read and where all I read. In a recent meeting of US Indians Politicial Action Committee, where I was the sole student attendee among 20 odd people including top governmental officials of USA, Arun Shourie (Indian MP and former Minister), venture capitalists, and Vice Presidents of Companies and Technological associations, I heard lots of voices praising India. There were discussions on the famous nuclear deal (I must put a post on this) and India's crumbling infrastructure and redtapism fighting the zealous entrepeneurism and intellectual prowess of the youngsters. Newsweek put a cover story on India, every major newspaper described the story of India and ABC news has a great news coverage on "Ïndia rising" (video can be found here).

What are the pros and cons on the media coverage? There are some blogs like this which are very critical to such a coverage. They argue that India is being covered in a shanty way (it showed some slums and markets) and it would enforce stereotypes.. But, I hold a contrary opinion. What was shown in the videos were never demeaning. They go to show the realities that we cant forget. We hold the world's poorest of the poor, most illiterate of the illiterates, worst corrupted of the corrupt... But, amidst all this we are able to rise due to our skills of entrepreneurism and intellect. This fact cant be denied. Indian rise is so remarkable in history, yet so similar to other great rises.

Just after the medieval period, Europe experienced such an age. They were very curious to know science and technology and rewrote all the conceptions about science. They read all the stories of Greece and Rome and a sense of great national pride ran among them. That pushed them really hard to move up. They were curious to learn what is outside them and went all around the world, settled everywhere and became becons of intellect. The collective set of these practices formed the renaissance. The rest is history. The tiny continent with limited resources and harsh climate ruled over the world. An exactly similar thing happened in Japan, called the Meiji restoration. Thus, a small island in Pacific Ocean, started to reinvent itself (though it was originally forced to open up by American commaner Perry) and became a world challenger. In Germany such a process occured when the tiny german states experienced extreme nationalism and started to unite under Bismark.

I'm amazed to see all these factors happening in India. There is great nationalist sentiment and a pride of India, people reinvent older traditions like reciting Vishnu sahasranama, goin 2 temples and learning bhagvat geetha. People are so much curious to know the rest of the world. An average Indian knows much more abt US and Europe than an average American know abt India. We explore all over the world, and found everywhere. We maintain our cultural ties throughout our life. So, India is on the right track and world is truly celebrating for the right reasons. India's economy and infrastructure may not be comparable to China, but the basic social and cultural factors are ready for a big bang. We should soon see india accelerating to a double digit growth, once the chain reaction of recent economic growth reaches a critical factor.

I'm sorry folks for keeping my blog stale. There are no posts in the last 10 days and its a shame. The excuse for this is the interview process and followed by offer negotiation with Microsoft and the enormous time spent in reading newspapers about nuclear deals and the new India. Also, I'm set out to start out a career blog that would put my experiences and collected experiences of my peers and online contents for higher studies and software jobs. New posts coming soon.....