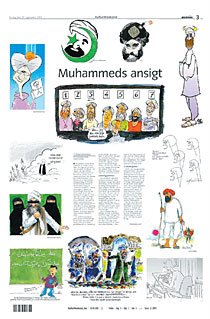 Yesterday I saw the news items about the angry reaction to the Prophet Mohammed's cartoons published by Jyllands-Posten. Caricaturing the Prophet is a sin in Islamic tradition and they brook no tolerence about anything said about their religion. But, apart from two of these cartoons none of them are really derogatory. While it is understandable to see the Islamic people hurt by the images, there is no excuse for their harsh reaction. They react to the smallest of things in the harshest of the ways. A minor protest and few civilized news articles could have conveyed their hurt feelings.

But, they are taking it too much and recalling ambassadors of nations and boycotting their products are over-reaction. If the Muslims react so hard for such simple things democratic traditions of criticizm and debate would never work. Within the borders of accepted civility, arts must be allowed to be expressed and this would also do good to them. By accepting criticism in a civilzed way, they can rectify their problems and gain constructive solutions. This would also make people of other religions to get more comfortable in discussing about the problems of the troubled religion and we would get better soltuions for fighting religious terrorism. Muslims!!! why should u leave ur religion to the drain and gain sterotyped images by protesting in harsh ways. It would serve no good to erase the world image of islam being a religion of hatred and violence.

See this article in: http://cagle.msnbc.com/news/BLOG/main.asp#anchor745040 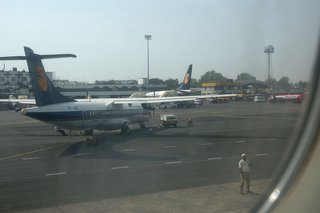 When I went to India, recently, I was totally disappointed with the way the infrastructure is lagging behind all the hype about Shining India. We are way behind the Modern World. Visiting the major airports in the World - Singapore Changi, Kaula Lampur, Washington Dulles, London Heathrow in the last few weeks left a deep sense of inferiority complex in me - even if we put all the Indian airports together they would not match the size of any one of these airports! India has 6 major airports - Mumbai, Delhi, Kolkata, Chennai, Bangalore and Kochi and a dozen other smaller airports. All these aiports have just a single runway and can handle just a few thousand passengers, at a time. This is for a country with 1 billion people!!!

The long lines for every one of the services, persistent delays, ghost-of-the-night flight timings, irregular organization are sure to leave a great distaste on any new visitor to India. The worst part is that none of the major airports in India have changed a bit ever since I started them visiting as a 10 year old kid.

In this context comes the issue of Modernization/privitization of the major airports in India. Modernization is not an option. It is an absolute necessity for a country with appalling infrastructure. If it doesnt do this, all the hype about a Superpower India will vanish. Businesses will start to falter with the result of reluctance of International delegates and vistors to visit its airports. We will also lose all our tourism potential.

When I see the news about the protests in India against the modernization, it sends the blood rushing due to rightful anger. Who are the airports for? Is it for the paying customers who are the backbone of its business, culture, education and tourism or some ignorant employees who are responsible for its pathetic state? How long can those employees live in the dream world cherished by the Communist cults? Its our society's duty to provide the ultimatum - Agree & Prosper or Agitate & Perish. Its our society's duty to clear the undue delays that hamper the wheels of modernization.

The airports are not just gateways to countries, but they are the gateways to Civilization and Culture. For Indian case, it is the true test for the country's quest for a place in the modern world.