After dilly-dallying for a few decades India has stepped up the war on India’s left-wing Maoists who seek to bring an ultra-left communist ideals to India through violent means. Operation Greenhunt seeks to deploy 20000 paramilitary troops in the communist affected regions and smoke the terrorists out. It is probably India’s biggest anti-terror operation outside Kashmir.

India’s “revolutionists” come under the banner Naxalites named after the town Naxalbari in east India from where they originally started the movement. Though Indian government understates the problem, it affects 220 of the 450 odd districts of India apart from the neighboring nation of Nepal.

The issue partly stems from the fact that India’s development doesn’t always reach the interior which is beset by a variety of problems including faltering agriculture, encroachment from unethical corporations and greater competition for the rich mineral resources – all the problems that afflict sub-saharan Africa. There is acute poverty that politicians and bureaucrats have not always addressed.

It is a well known phenomenon worldwide that regions far away from oceans and major waterbodies will have significantly lower development, but various Indian government failed to appreciate this fact and add greater developmental measures to compensate for this handicap. The red-belt (red stands for communism) also doesn’t have a major city apart from the tech center of Hyderabad near it and that has deprived the locals from modernization and urbanization. Most of the villages don’t even have electricity and social ills like hunger, illiteracy and infant mortality is rampant.

While the problems are genuine, there are some evil elements that try to make use of the issue to implement their extemist ideals. The Naxalites are a brutal organization and have conducted many a brutal beheadings in Taliban style. Like Al-Queda they are highly decentralized and very sophisticated. This kind of barbarianism is further disconnects the region from world economy and exacerbates the poverty.

While brutal force must be used against the naxals, extraordinary care must be taken not to victimize those tribals who have no part in this. We don’t want to increase the ranks of the disillusioned. The federal government must also studiously monitor the excesses of the military force that is often an issue in Kashmir and the north-east. But, most importantly the root cause for the socio-economic ills have to be solved. The federal government must start a massive project to bring electricity, roads, markets and other infrastructure to these regions at war-footing. Integrate them with national & world economy at a great speed and bring substantial investments and development to this region. And anything that stands in the way of this development must be thrown out at once.

The federal government must also try to give more autonomy/separate statehood to some of the regions in the affected zone (including the creation of Vidarbha & Telengana) to prioritize the developmental issues that affects the red-belt. By separating the red-belt of Vidarba and Telengana we would free up the prosperous states like Maharashtra & Andra Pradesh to focus on issues different issues – like how to bring their regions to world standards.

But, Sena is not contended. They hated Shah Rukh Khan (a resident of Mumbai and the top star of the Bollywood) who acted in patriotic movies including Swades and Chak de India. Then they hated the city born Anil Ambani (who ranks among the worlds top 5 businessmen) and Aamir Khan – the actor of Rang de Basanti & Lagaan. Well, these are all “outsiders” – those who are not native Maratis, so it is ok. But, they still don’t want to stop with that.

Now, they hate Sachin Tendulkar – the god of Indian cricket who is loved by people beyond regional, linguistic and national barriers, and a Maharashtrian himself.  Then they hated their political allies – BJP and the ideological masters – RSS. All because they dared to speak the obvious – Mumbai is a part of India and every Indian has a right to it.

As Sena, MNS and its followers keep setting the records on hating, we Indians need to ponder on what allowed these parties to exist and get votes in the first place. How can rational and patriotic Indians support such dangerous elements that threaten the fabric of India? The problem is not just in Maharashtra, but exists in some form or the other throughout India. Regional parties of Karnataka, West Bengal and of course the Dravidian parties of Tamilnadu used fear & hatred of outsiders to gain votes and grab power. They have manipulated their electorate and nurtured a sub nationalism that run counters to the one Bharat idea.

As Indians we need to nip this in the bud. Let’s get rid of parochial regional parties and support politicians with a vision to unite India and solve its real problems. And Maharashtrians and rest of India have a lot important problem of farmer suicides in Vidharba to tackle before discussing the stupid language imposition on taxi drivers. And Sainiks should also ask themselves if Shivaji Maharaj and Bal Gangadharar Tilak approve of their hatred of non-Maratis.

When will India and China overtake US in GDP (nominal terms)? 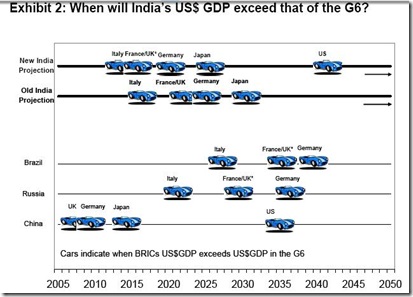 Today I was appalled to read the statement from a former Lok Sabha speaker (head of Indian legislature)  Murali Manohar  Joshi that “Mumbai is for only for the people from the state of Maharashtra”. Mumbai is the economic & entertainment capital of India and how can it be closed only to the people from its surrounding state? Mr. Joshi does not limit to just words but through his party has contributed to enough violence against “outsiders” – Indians from other states. Think of what would happen if NYC declares it is only for ethnic Newyorkers and start burning those coming from Pennsylvania or Maryland ?

The problem is limited not only to Mumbai but in other cities too. India’s tech capital of Bangalore experienced riots and violence against Tamils and other “outsiders” in 1990s, and some of its leaders blocked developments to the city like a monorail plan arguing that the Kannadigas (natives of the surrounding state of Karnatka) outside the city are being left out. The other tech city of Hyderabad is caught in a tussle between regions of the state of Andhra Pradesh. It is a shame that 3 of the major tech centers of India are now a victim of such chauvinism and sub-nationalism that both threatens India’s unity and economy.

It is time for Indian government to put its foot down and reinforce the idea - “India is for all Indians” and there cannot be any linguistic/regional/casteist group that can threaten this idea of India. Any Indian is free to move/settle in any part of India and state/local government that thinks otherwise must be threatened with dismissal. Any leader who incites violence in the name of subnationalism should better spend time behind bars.

But, more importantly Indian government should consider separating the major metropolis from their surrounding states and give them politcal autonomy – under Union Territories classification. China has this way and cities like Beijing, Tianjin, Chongqing, Hong Kong and Shanghai are autonomous & don’t belong to other provinces. This allows the cities to pursue their development and handle their problems independent of their adjoining states.

Just like how national capital of Delhi was carved out of the state of Haryana, metropolitan cities including Mumbai, Bangalore, Hyderabad, Chennai, Kolkata have to be carved out of their parent states and be given autonomy as Union Territories. This will prevent different communities fighting to attach the metropolis to their own region similar to what is happening in the state of Andhra Pradesh, and will allow the city to devise its own transportation and urban development infrastructure.

Chandigarh, Pondicherry and New Delhi have had no problems by not being a part of a major province and I would like to see other metros too in this. There could be a unified city development council at the center that can manage and guide these autonomous cities.

And coming to Indian politics, if the national party of BJP doesn’t rein its ally Shiv Sena and get out of such narrow minded interests it will permanently damage its electorate in the rest of India.