Brutal carnage in Mumbai: Whom to assign Blame?

I was surprised not to see any blame going to state and local level politics in India, who control the law and order machinery. Federal government could do only so much, and it is the state governments with all the police power that must ensure blocking low level crimes that feed into the high level terrorists. Mumbai has long been under the control of Mafias, and with their low level networks and access to money, it would be hard to stop the terrorists unless we stop these mafias. But, many of them have connections with all level of local politicians. So, we need a powerful police force that can stand independent of the corrupted local politicians. As KPS Gill showed in Punjab, an effective police force can neutralize even the most brutal of terrorist forces.

Unlike in the case of September 11th New York and July 7th London, Mumbai or for that matter any major Indian city, is not new to massive attacks. New York and London and Madrid were genuinely surprised by the scale and nature of attacks and made a massive ramp up in Law & Order to thwart any further attacks. India doesn't seem to have done too much as continued instances show. Taj is the center place for all powerful people visiting India, including Presidents and CEOs and how come dozens of terrorists entered there with weapons and with intimate awareness of the hotel? What were the intelligence and security forces doing, leaving such a high profile place loosely guarded?

What is the nature of the past investigations with the prior Indian terror attacks? There are no verdicts on any of the cases in the recent terror attacks. What are the courts, CBI and rest of the machinery doing?

We have been witnessing disaster situations of every kind. From nature created Tsunamis, earthquakes, floods to man-made terrorism, stampedes, fires and carnage of all flavors. Why is there no national policy on an effective answer to disaster, like the one Israel has. We need a national level preparatory education that would teach the common public on ways to deal with a crisis situation - and we need to integrate NCC and other grassroot level forces to make a combined national preparation against emergencies. We might have to make a mandatory short military training programs at the college level, so that we can better supplement the government forces. With its relatively smaller army (compared to population) and an ineffective police force, India is right now uncontrollable and unprepared.

The terrorism answer must focus on starting from preventing the lowest level crimes and flouting of the rules. As the book "The Tipping Point" and the "Broken window theroy" show, once the bad sections of the society realizes that they can go scot-free on most of the smaller crimes, they will tend to increase in scale and things will start to snow ball.

What should the world do post-Mumbai?

The carnage in Mumbai is still going, 48 hours after the crisis started on a Black Wednesday. Terrorists have been mostly neutralized except for the Taj Mahal hotel, where one suspected terrorist seems to be holing out still. In size and daringness this is comparable to only September 11 - when a group of hijackers synchronized their attack to destabilize the commercial capital of the US. 9 different locations where attacked killing Jews, Europeans and scores of Indians. Once, the crisis ends we have big questions ahead of us.

The world community needs to come together against terrorism, in full force. A lot of columnists have claimed it is a home-grown Indian issue, and Indian officials have predictably used their stock quote "It is from Pakistan". Foreign investments would hurriedly get out of India and there might be bleeding in the Mumbai stock exchange next week, when Indian traders return after the disaster and American traders return after  Thanksgiving break.  Such, knee-jerk reactions is what terrorists want. World must stay together and realize that no part of world is safe - in the past few years they have hit the heart of London, New york, Madrid, Karachi, Bali, Mumbai, Delhi.... and we must not give into the terrorist ransoms and make them force our investment decisions.

1. World should pay more than lip-service against terrorism. We must unequivocally condemn global terrorism in all forms and for all causes. Whether it is the Chechens fighting against Russian, Uigurs against Chinese, Tamils against SriLankans, muslims against Israel, Talibans fighting Americans or the host of terrorist groups striking India, world must unilaterally act against them and work shoulder to shoulder. No end would justify the means, and even if we sympathize with the cause of people causing the terror in some instances (like the Tibetans who went in rampage against Chinese this summer) we must unconditionally act against it. Just as Pakistan is finding out with its home grown terrorists, and America found with the Afghan terrorists they trained in1980s and Indians found with the Sri Lankan terrorists, terrorism is like a Frankenstein monster that will eventually prey on its creator.

2. India would need to stop pin-pointing Pakistan for all the troubles and also recognize troubles in its own locality. How did dozens of armed men, with the most powerful weapons synchronize attacks against so many locations in a city already under terror alert, and still security forces had no clue? What were the intelligence agencies doing when terrorists were getting into hotels that are frequented by foreign leaders and other critical visitors to India? India must answer a lot of tough questions and should tell the world what happened with all the investigations it launched in the previous terror attacks. Indian law and order machinery is in shambles and controlled by a fracticious political system at the state levels. While India's federal institutions and leader command relatively, high-respect, India has a horrible set of intuitions at the state level. 6 years ago, in the Indian state of Gujarat, the state law and order system actively assisted militants to commit a carnage with the common people sitting in rooftops to enjoy the spectacle. India needs to rescue its horrible state of law and order, and take the state governments to task. Without that it is so vulnerable to terrorist attack and no kind of protection could be kept, as terrorists could easily slip through the cracks.

Pakistan could indeed be the cause of the troubles, given its notorious legacy, but it might mostly be from the anarchy that is spreading out there. India must work with the Pakistani government to collaboratively put together the terrorists, and not invite a macho match in the borders, in a volatile region.

3. Investors must proactively help the countries that are a victim of the terrorist troubles. Terrorists want to take countries out of international markets, and we must thwart such attempts. World should give a collective answer, and give our unity and solidarity and that will be the worst answer a terrorist would be expecting. If his aim is to destabilize economies, split communities and cause panic, what will be his reaction when we stand together to unite communities and strengthen economies.

Let the world stand together fight this global menace. Terrorists have yet again struck Mumbai, the financial center of India. The attack around 10:30 pm Indian standard Time, was one of the most daring things in the recent times.

India has been plagued by insurgents for the last couple of decades and is related to the global terror attacks emanating from Islamic insurgency in Afghanistan and Pakistan. The attacks seems to have been highly coordinated and aims to scare away away the tourists and other foreign visitors from the Indian financial capital. The information available currently is pretty sketchy and a detailed report will be made in this blog soon. One only hopes that International community will collaborate stronger with India in rooting out this global terror mania. 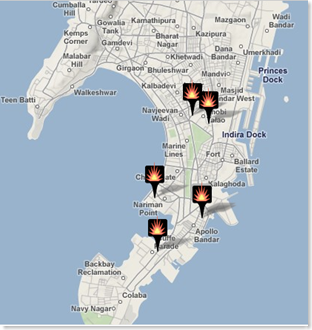