State of US housing

Home construction turned up unexpectedly in April. It seems multi family dwelling is growing up. Here is the data from census.gov: http://www.census.gov/briefrm/esbr/www/esbr020.html (I have circled the point the where it started climbing up). Even with the current, it is hardly a great news, given that the number of units started is at the lowest point in this decade. You can see pretty detailed data here: http://www.census.gov/const/newresconst.pdf 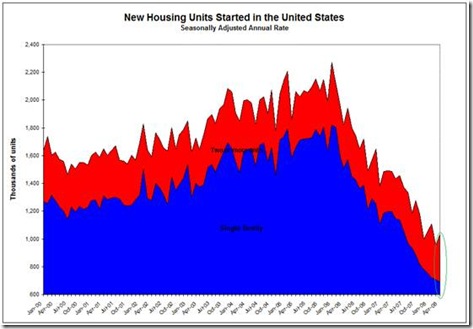 Interestingly, the home ownership rate decreased in the last one year (maybe due to foreclosures?) 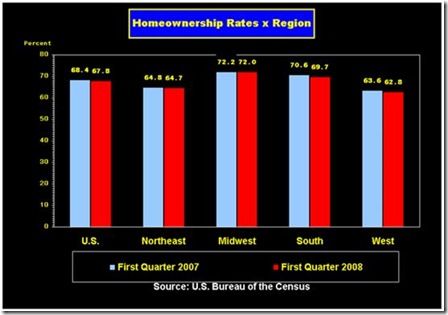 Last week I was reading through Paul Erdman’s “The panic of 89” a novel about a fictional systemic financial crash in 1988. Though the book is more than 20 years old, it is amazingly close to the current situation. The setting is an America with a Republican president who in his 8 years rule has loaded the country with a lot of debt and the international community has lost faith and dollar is having massive depreciation, while the economy is flirting with recession. The economy is slowly clawing into a recession while a Democrat President is to take control in a few weeks. In the meanwhile the commodity markets are menacing, house prices are falling, people are walking away from mortgages, Mortgage Backed Securities markets and Swap markets are crashing (he talks about colossally the derivatives market has grown in 80s) and a rogue leader from Venezuala is trying to screw US by grouping Latin America. The Fed chairman is as confused as Mr. Bernake and is trying to lower interest rates. All this is causing Bank of America to go the brink of a solvency crisis, and the plot involves a former IMF chief and the Fed Chairman in bringing back America to Normalcy. And then there are terrorists, murders and other stuff. The characters are not like the normal ones you see in other popular novels, but if you like Erdman’s novels you would appreciate the depth of characters. It is not just an interesting action packed novel, but this author who is a former Swiss Bank chief packs with loads of finance stuff that look as good as new. The author has always been ahead of his time and generally respected in Wall Street for foreseeing things – his novel “A Billion Dollar sure thing” that came in early 70s was talking about Oil and Gold crisis and another one of his old novels was talking about the trouble with Hedge Funds and stuff.

If you like action packed novels and want a different perspective of the current financial crisis and understand the behind the scenes politics in Fed, then I would recommend this book. Here is an old review of it in NY times.

Writing fiction frees an author to use imagination, though the higher standard for non-fiction doesn’t seem to be there anymore. This author who was a Chief of Swiss Bank in a previous life was jailed for fraud and spent some time in Basel jail. There he got an acquaintance of a professional bank robber from whom he learnt a lot of tricks. He wanted to originally write a non-fiction about global finance, but the Swiss jail didn’t have a good library and so he converted his ideas and personal experiences into a novel and that became a runaway hit. Unlike his other novels this particular novel is often criticized by his fans for not being too fiction-like and too much of real life finance. Many of the characters are real – Reagan, Kissinger, Carlos, Volker whose names are used directly instead of building characters based on them, as done by other novelists. And a lot of the ideas were outrageous at that time – he speaks a lot about Derivatives, Credit Default Swaps, Mortgage Backed Securities and stuff at a time when hardly more than a couple knew mortgages could be securitized. I was reading through the reviews in Washington Post of the 80s and they were wondering how these could collapse the world financial system. But, looking from 2008, we know how. Though, this novel fell out of favor from his other books with more fiction contents, I consider this to be among his best.

He died last year and you can find more about him here: http://www.timesonline.co.uk/tol/comment/obituaries/article1722875.ece

State of IT in the first quarter of 2008

San Francisco Fed recently published some hi-tech related stats and I find some of the data interesting.

I don’t know why many of the major news sources didn’t comment on the data.

Summary: Computer Hardware and Software shipments is slowing down, job market growth in IT sector in this Western region is slightly positive in Services and slightly negative in IT Manufacturing, and Industrial production of IT industries in the last quarter seems to have dropped sharply, though I suspect this drop is seasonal. 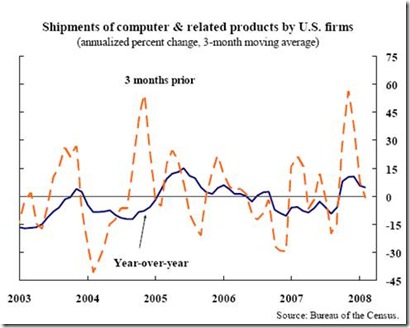 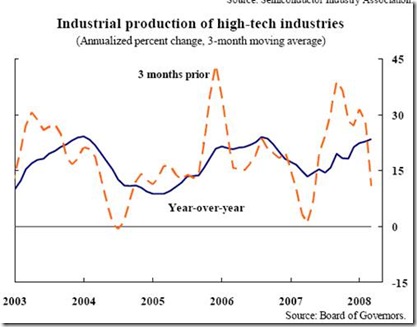