Bracing up for Recession

Looks like this is gonna be recession year in the US. Recession means a drop in economic activity and associated with drop in investments, company profits and employment rates. How this going to affect various people?

First, interest rates will significantly drop as a reaction to recessionary pressures, and couple with high unemployment rates and inflation, this looks to be bad for saving money :-(. However, this seems to be right time to take a look on basic things. Based on my readings I find the following to be the reasonable advice for people like me.

1. Dont leave secure jobs, as job market will go south this year.
2. This is not the best time to go to school for doing MBA and such, as markets might tighten up in the next year. But, a lot of experienced folks who can untangle the mortgage mess and stuff will find great jobs.
3. Maintain 6 month emergency fund that should take care of ourself even if we dont have job for a long period. This fund must be maintained separately in money market or savings accounts.
4. Reconsider the portfolio. While stocks do better in the long term, it is time to reduce the risk by taking bit more of bonds and other secure avenues. I moved mostly to secured investments last October, and could wither some of the drop in my retirement plan.
5. Rethink investments. As big ticket investments like starting companies or building houses will be hit during this recession, it is time to reconsider those things for now.

If we are able to maintain jobs and have savings cushion, recession could also be a great time. A lot of great investment opportunites will be available at the later part of recession when everybody else will run out of cash. Houses and companies could be got for dirt-cheap prices and the recession will also help the economy overall by cutting down wasteful expenditures and over consumption while moderating the prices (of oil, houses etc that had runaway inflation during the current boom).

In terms of countries, the expectation seems to be that China and India will cool down affording them to rethink their policies and priorites. China will be hit by drop in exports, while India will be hit by drop in investments. So, its time for China to put renewed focus on domestic consumption (including by appreciating Yuan) and India to start second wave of reforms. When India badly needs money it can no longer afford to keep sectors like Banking, Aviation, Retail stores under tight leash and might be forced to open these to foreign investments. Dollar looks to get weakened more as there is a substantial interest rate gap between India and US, and IT companies will be hit both by strong rupee and a drop in US economic activity. Its time to rein in the India's runaway salary growth and diversify beyond IT.

India can gain a lot. First, if IT weakens a bit and salaries start cooling down, other Indian sectors like Auto and manufacturing can pick up as they can get quality engineers at affordable salaries. It makes no sense for the nation to train a mechanical engineer only to lose to Infosys to do some payroll processing. Also, this recession could get the hell out of Ford and GM who would be forced to do a lot of offshoring and India seems to be the best choice. Already Tata Motors and Hyundai and have begun huge expansionary cycles. And healthy Indian companies can get great bargains with a weak western economy. I wont be even surprized if a group of Indian companies together buy up Ford in the next decade. Also, its time to realize our strengths in Finance and Banking. Its illustrative to note that almost all of the Citi's current top management are Indians and we have similiar loads of talent hidden in our moribund banking sector. Its time to get to Basel-II banking standards and open them to International capital and competition. Maybe, someday we could see a ICICI or a privately owned SBI could take on Citi or Bank of America in head on competition in international turf.

Second, Indian economy can also gain by cooling down of real-estate markets at home. Just like Americans, Indians seem to harbor the thought that house prices can never go down. Americans have learnt the lesson and Indians have still not. Just like any investment, house prices can as much go up as down. A lot of houses are priced at 100 times the annual per-capita income of Indians and the development looks unsustainable as a lot of them were made with unreasonable expectations of salary growth. Now, house prices can go down significantly in a lot of over-priced markets and this will improve affordability for common man.

Third, the market crash will make people rethink consumption. While too much dropping of consumption is bad, too much of consumption is even more bad. Indians are consuming rather too much for their salary levels and savings are not as great as Asian levels. This can hurt a lot of people in the forthcoming real-estate and stock crash, and if managed correctly this could lead to a long term balance between savings and consumption. 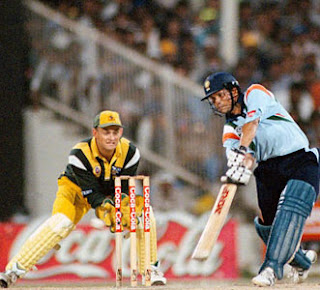 I used to be a big fan of cricket and the last couple of years, I had not been watching much, not the least because of lack of access to Cricket Channels sitting at Seattle. And Indian team had a few debacles and Australia has become predictable. Now I started watching Cricket again starting with the current India-Aussie series and boy the game changed so much.

The 1990s look nostalgic to me, when every team had an equal probability to win. Back then, Australia was not so strong and West Indies was not so pathetic. South Africa and Sri Lanka were at their peaks, while India and Pakistan had extremely good players. New Zealand and England were getting as they always were, disciplined but not too threatening. In terms of fun - 1993 Hero Cup,1994 Wills Trophy, 1996 Wills World cup, 1996 Titan Cup and 1998 Sharjhah cup were so unforgettable and times seems to have change a lot. The atmosphere and celebration no longer seems to be there. Even the world cups like those in England (1999), South Africa(2003) and West Indies (2007) looked a lot sedate in comparison. Looking a bit deep, I see a pattern. I always wondered how cricketers world over seem to reach to the top in unison and get out in unison. At one point in 1996 almost the entire Indian team was 23-24 years old, all of them trying to cement their position. And like high school graduation, there seems to be a batch of people who come in at the same time and graduate at the same time. 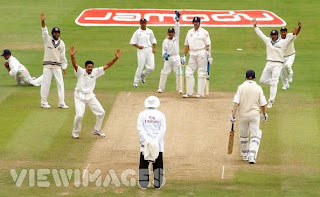 The first wave took in the 1970s with the coming of Kapil Dev, Gavaskar, Viv Richards, and so on. The first wave of cricket ended after the 1992 when a ton a great players left the game. Viv Richards, Desmond Haynes, Krish Srikanth, Kapil Dev, Ravi Shastri, Javed Miandad, Imran Khan, David boon... all who made the first wave of ODI cricket were gone. Their age of ODI cricket was just a shortened version of the Test match. Bowlers were still at the top, batsmen tried to be cautious and concentrated more on techniques. At one point Desmond Haynes, 17 centuries and 7000 odd runs were insurmountable. But a new wave of cricket took place just before the 1996 world cup. With 15 over field restrictions and the retirement of many great bowlers, a new age of young cricketers took to challenge every possible batting record. Sachin, Jayasurya, Kirsten, Anwar, Ganguly and later Hayden and Gilchrist, totally changed the role of openers. Big hundreds were no longer the issue and once improbably 300+ scores on a 50 over game became the norm. Explosive people like Afridi made cricket look like baseball with a do-or-die hits for every ball. And the once improbable Hayne's record was beaten by almost every credible batsman of the era. In fact, Tendulkar has now 41 centuries and 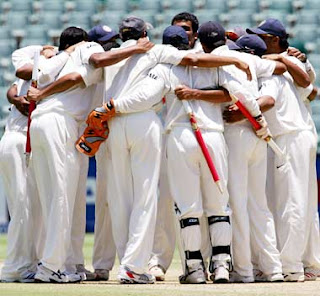 Now all these greats of second wave seem to be going off at the same time, just like the first wavers did a 15 years ago. Kirsten, Wasim Akram, Lara, Walsh, Warne, McGrath, Srinath... have all gone. Soon, there wont be Dravid, Ganguly, Tendulkar, Gilchrist, Ponting, McGrath, Inzamam Ul Haq, Jayasurya and world cricket will look a lot different. As this third wave begins cricket seems to get more equalized. Australia dominated entirely during the late second wave with the peaking of all their greats - Warne, McGrath, Ponting, Gilchrist, Hayden, Symonds... Now, already with teh first two gone the bowling looks weak and with Gilchrist gone the top order and wicket-keeping will take a hit. And there is no credible alternative to the top three batsman. Clark, Hussey, Haddin look nowhere near the greats and with a weak bowling Australia looks to be beatable once again as India has shown. 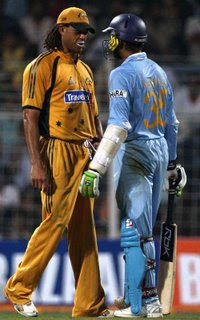 India seems to be positive with the third wave with the historic failures of Indian team like running between the wickets, pace bowling and fielding have changed the lot, while there must definitely be worries on historic Indian spin department. It looks the weakest in India's cricket history.

Time will tell how man of the current batch will replace the records set by the second wave guys like those of Tendulkar and Muralidharan. At school, we used to spend hours speaking of the great comparisons like batting of Mark Waugh-Sachin-Lara, spinning of Kumble-Muralidaran-Mustaq-Warne, fast bowling of Akram-Srinath-McGrath-Walsh. A lot of these people including Tendulkar, Kumble, Walsh and Akram were splendid ambassadors of the game with their exemplarily on-field behavior. Compared with those, the current behavior on the field looks uncouth and barbaric. When people Tendulkar, Kumble and Warne celebrated their victories there was a touch of grace. It was fun and even the appealing to the umpire was amazing. But, with the unrefined third wave, the appeals and celebration had to be restrained by ICC so much that the match looks sedate.