September 11 - A day of remembrance 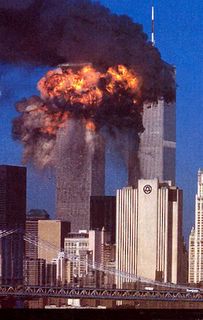 This day appears so vivid in my memory... Who can forget this day, when the nation of America was threatened, for the first time in its own shores? Who can forget when the symbols of economic prosperity of the world - the WTC are brought down by a group of evil men believing in bigoted ideology?

As a coincidence, on this same day in 1893 Swami Vivekanda spread his word of religious tolerance and equality of religions in the Chicago Conferance. On this same day in 1906, Mahatma Gandhiji started his legendary Sathyagraha that ensure peace and justice for a billion people and stood as an inspiration for freedom all over the world, right from Martin Luther King to Nelson Mandela. And a great chain of events took place after this 9/11 is standing to put an end to the evil flames of religious extremism.

A number of conspiracy theories are set to make this disaster look like a government plot and they are as credible as a conspiracy theory that all governments on earth are controlloed by some aliens from Jupiter. People think that America is invicible and the terrorists are weak people who cannot hit at America, unless there is an American government angle to it. So, what about the countless people who die everyday due to bombs, in Mumbai, Kashmir, Israel, South-east Asia, Chechenya, Darfur, Baghdad...? Are all these US government plots? The truth is that a very vicious terror group has started to engulf the world and to understminate their power is the sure recipe for peril in the world.

It is very easy to criticise and find fault with the establishment, as though given a chance we could individually set right all the faults in the whole world. It is so easy to underestimate the complexity of running an establishment as people who had even not even made attempts to take leadership over a small group of dozen people, would know. It is so easy to cry that in retrospect, we should not have interfered in Middle East. But, what most people don't understand that the perils of America (and the world) came when US government tried to stand aloof from the problems in the rest of the world. When US didnt care that a new group of parties took over the government of Germany in 1930's, world had to pay with the World War. When US didnt care that a group of religious zealots are taking over Afganistan in early 90's, the world had to pay with Taliban (who brutally treated humans).

In reality, the world needs strong leadership who can guide us with the pursuit of freedom. China aids and supports all the brutal regimes in the world - Sudan, Burma, etc. and Russia is not better. Europe is weak to handle anything. And no other nation stands up to sholder the responsibility. So, without question we need a leadership. America probably may not be the ideal. But, we might have no choice. We need someone... Otherwise the world would skip into Chaos as happening in most parts of Africa and Asia.

On this solemn day, we should look forward to a world of freedom and democracy and put all the crazy conspiracy theorists to rest. World has too many problems and let us build stronger governments in this pursuit.